We never guarantee a particular result.  And past results cannot be used to predict the outcome in your case.  But we are proud of the results we have achieved for our clients in difficult cases over the years.

A survey of the top verdicts and settlements by North Carolina Lawyers Weekly has confirmed that David Rudolf and Sonya Pfeiffer secured the largest verdict or settlement in any case in North Carolina in 2017. David Rudolf and Sonya Pfeiffer secured a $9.5 million settlement in a wrongful conviction case against the City of Charlotte – the largest such award in history. 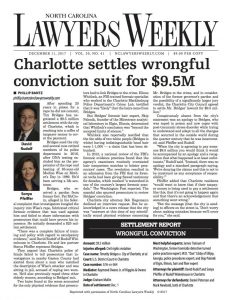 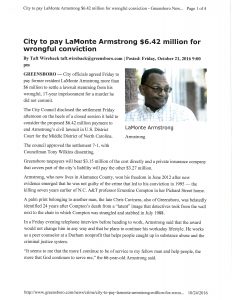 David Rudolf secured a $6.4 million settlement for LaMonte Armstrong for his wrongful conviction for a murder he did not commit. Read Greensboro News & Record article. 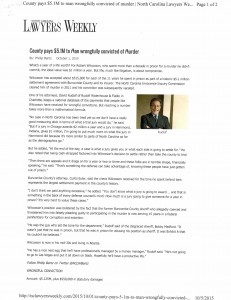 David Rudolf secured a $5,125,000.00 settlement for a plaintiff who spent 11 years in prison after pleading guilty to a murder he did not commit.  Read Lawyers Weekly article. 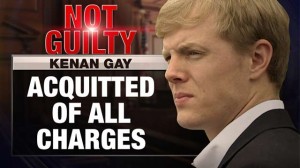 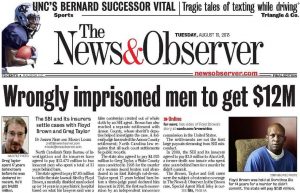 In a rarely seen plea deal, Sonya Pfeiffer and David Rudolf secured a voluntary manslaughter deal for Carole LaRossa, a woman charged with first degree murder in the killing of her estranged husband, a former New York City police officer.  In reaching the agreement with prosecutors, Pfeiffer and Rudolf presented a full investigative report highlighting years of psychological abuse, hidden drug use by the victim, and questionable involvement of retired New York City police officers in the investigation by Charlotte-Mecklenburg Police.

Read about the story in the Charlotte Observer or on WBTV’s website.  Watch coverage on WSOC-TV or WCNC-TV. 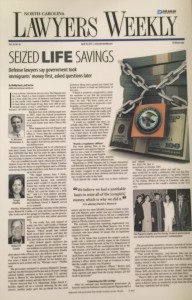 Defendants get Money Back from Government After Five Years 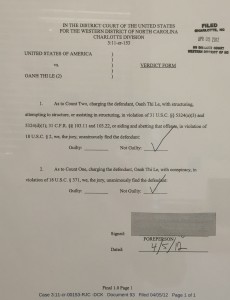 David Rudolf and Sonya Pfeiffer represented the defendant and her husband, both naturalized United States citizens who emigrated from Vietnam in 1981, who were indicted for “structuring” – making multiple cash deposits and withdrawals from their bank accounts in amounts under $10,000. Defendants, who spoke little English, testified that they were told they would have to fill out bank forms if they deposited $10,000 or more in cash at one time, but did not know that these forms would be sent to the federal government. After a three day trial, the jury deliberated less than two hours before finding both defendants not guilty of all charges. 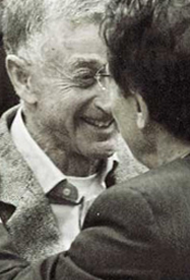 In 2003, following a 5-month trial that was the subject of an award-winning documentary entitled The Staircase, novelist Michael Peterson was convicted of the murder of his wife Kathleen, and was sentenced to life without parole. In December 2011, David Rudolf, who had represented Peterson at the trial, filed a motion for a new trial, alleging that the blood spatter evidence used to convict Peterson had been fabricated and misleading. Rudolf represented Peterson at the 2011 hearing on a pro bono basis. The trial judge, after a hearing during which Rudolf called sixteen witnesses, granted Peterson a new trial. He is currently out on bond. 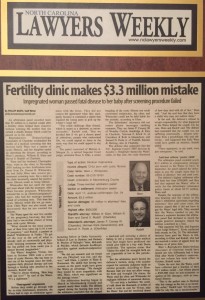 Plaintiff was an IVF patient at a well-known Charlotte fertility clinic that missed the positive results of her cystic fibrosis screening test. As a result, the patient’s child was born with cystic fibrosis, a fatal disease with no cure. The highest settlement offer before trial was $500,000. David Rudolf, along with Charlotte lawyer Bill Elam, secured a $3.3 million award for emotional distress (the only damages available under North Carolina law) from a three-person arbitration panel. 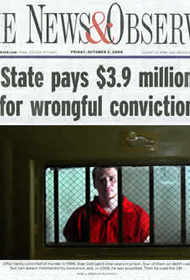 After being convicted of murder in 1998, Alan Gell spent nine years in prison, four of them on death row. But Gell always maintained his innocence, and, in 2004, he was acquitted. Then he sued the SBI:

“ The State Bureau of Investigation has agreed to a $3.9 million settlement with former death row inmate Alan Gell to end his lawsuit accusing the SBI of fabricating evidence and obstructing justice, according to documents made public Thursday. ”

“ Officials at the SBI could not cite a bigger settlement made on behalf of the agency. The state also spent $731,062.40 to defend the lawsuit. ”

Gell, who spent nine years behind bars , said the settlement amount is a concession of his innocence and the SBI’s wrongdoing. He was in jail on a car theft charge when the murder for which he was wrongly convicted occurred. 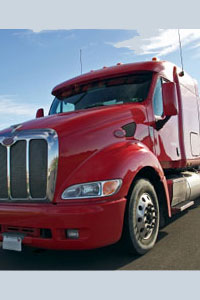 Plaintiff, a Baptist minister who was delivering books in a box truck, was struck by two tractor-trailers on Interstate 40 near Hickory, North Carolina. He suffered crushing injuries to his legs, necessitating the amputation of one leg above the knee, and injuries to his hips and his other leg. After discovering evidence that the driver of one of the trucks had been disciplined several times for driving incidents but allowed by the company to keep driving, the case was settled one month before trial for $10 million. 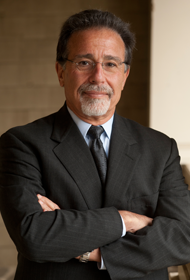 After being approached by the defendants, plaintiff invested over $2,000,000 in what was described as the Foreign Leveraged Investment Program. Plaintiff was told that the investment, in addition to generating profits, would also generate legitimate tax write-offs. The United States Department of Justice subsequently determined that the program was a fraudulent scheme. David Rudolf filed claims on behalf of plaintiffs for compensatory and punitive damages against all defendants. After more than two years of litigation and the depositions of numerous employees of the bank, accounting firm and hedge fund involved in the scheme, a settlement of $8.1 million was reached, over four times plaintiff’s loss. 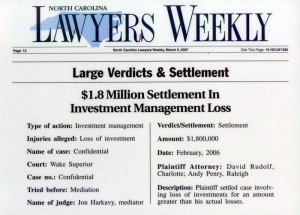 After convincing plaintiff to move his entire $3,600,000 portfolio of tax-free municipal bonds to a national bank, the investment advisor assigned to his account sold the bonds and bought common stocks in their place. As a result, the account lost approximately $1,600,000 in value. David Rudolf filed a claim, with Raleigh lawyer Andy Penry, for compensatory and punitive damages. The case was settled for $1,800,000, over $200,000 more than the plaintiffs’ out-of-pocket loss. 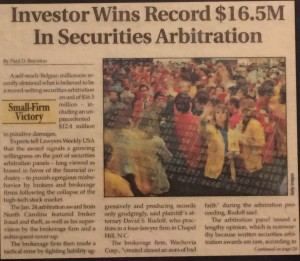 The plaintiff invested over $4,000,000 with a stockbroker in Charlotte. The money was eventually invested in a fraudulent scheme and all of the money was lost. David Rudolf alleged a failure to adequately investigate the broker prior to his hiring and a failure to adequately supervise the broker after he was hired. An arbitration panel of the NASD awarded $5,100,000 in compensatory damages and interest, and $12,400,000 in punitive damages, for a total recovery of $17,500,000. This is reported to be one of the largest, if not the largest, punitive damage award to an individual investor in the history of such arbitration.

After a death penalty trial that lasted more than three months, Carolina Panther’s wide receiver Ray Carruth was found not guilty of murder.  He was convicted of the lesser charge of conspiracy. 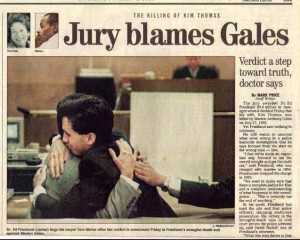 After securing a dismissal of the indictment of Plaintiff for the murder of his wife, David Rudolf filed a wrongful death suit against the man who actually committed the murder. After a contested four-week trial, the Charlotte jury found the defendant responsible for the murder and awarded Plaintiff $8.5 million – $3,500,000 in compensatory damages and $5,000,000 in punitive damages. 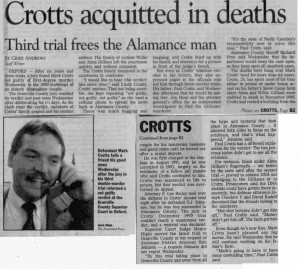 David Rudolf and Raleigh lawyer Joe Cheshire secured a not guilty verdict for Mark Crotts.  Crotts, represented by other counsel, was found guilty at his first trial, but the verdict was reversed on appeal.  A second trial, at which Crotts was represented by F. Lee Bailey, ended in a hung jury. 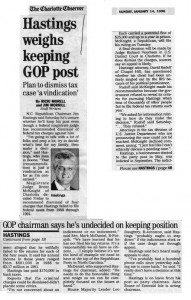 David Rudolf successfully argued that tax charges should be dismissed against the Chairman of the North Carolina Republican Party on the ground that he had been unfairly targeted for prosecution due to his political affiliation.

Charlotte physician arrested for the murder of his wife, found stabbed to death in their home.  After a pretrial hearing at which David Rudolf established that the police withheld evidence from the District Attorney’s office that implicated a handyman who had worked at the house, the case against Dr. Friedland was dismissed.  The murder has never been solved. 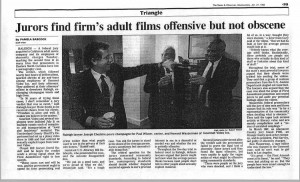 David Rudolf, along with Raleigh lawyer Joe Cheshire, convinced a jury to acquit a company and its CEO of all obscenity charges in the first federal obscenity case brought in federal court in North Carolina. 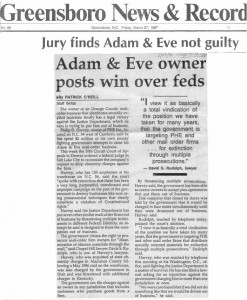 David Rudolf, as part of a team of prominent defense lawyers including Wade Smith and Joe Cheshire, won an acquittal for their clients on all charges of distributing obscene videos in Alamance County, North Carolina.